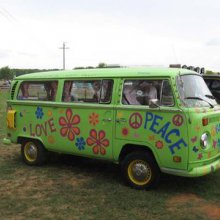 TUESDAY, THE 10TH OF AUGUST 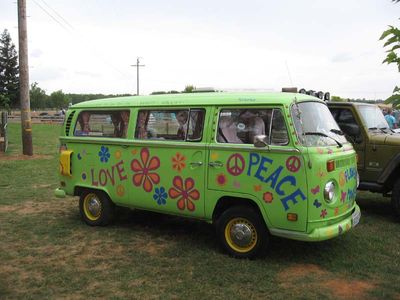 Dear Diary,
So here we are in Europe’s darker part, where once vampires and dinosaurs lived. I’ve only seen small parts of this place and I’m already suspicious. Hungary is not the country which Lonely Planet promised to be. Les says we’ll get along fine once we’ve parked our van inside – oops, I forgot to say about that, but better late than never: we’re only here for the duration of the legendary Sziget Festival, which is the biggest musical event in Hungary, so even if seasoned party animals say that Balaton SOund or Jegyalja beats it, do not believe them. S2iget was, and always will be THE beat happening, a country inside a country, which is soooo far above the material facts of everyday life! This is a party where money doesn’t matter – or so did Les say to me, bekause he was here last year too, while I’m just a first-timer. Anyway, the party people are nice, but As I said, the localz are different. Not only they are avoiding us and keeping their distance, but also wearing huge crosses and onions. Must be some obscure fertiliy rite, I dunno. But not everyone is a lost sóul: luckily there are several dozens of locals, who are also Sziget-heads, just like us tourists! They are really proud of their tickets, showing them off at every possible chance, as if these wéary bits of paper were some kind of expensive trophy. It’s really nice from them, even if I personally don’t understand why this stuff is so important here. The un-Szigetified locals are a frightening sight: dull, grey people with tired, hungry looks. Nothing, not even a smile, as if they were living in an endless 9 to 5 circle: no fun, no music, no partying. And yet, they are giving us the looks! One accident comes to my mind upon entering Budapest: we were circling away int he van with Les at the wheel, but at the church on Deák Square we saw something strange: a beggar! And it was a woman, not exactly bad-looking, but surely a little weary…or wore? Anyway, life had its deep marks on her face. It was such a sad scene: she held up a huge piece of cartoon, and upon this the following words were scrabbled with white chalk:
„okés, úgy látszik szarcsiznak a pofimra szigetjegycsi ügyben… kutycsit sem érdekli a problémcsim… na nem baj… majd ha megtudom kinek volt jegye és nem ment el és nem adott… az majd nem kap interjút, képeket ingyér, szívességet meg hasonló jókat, amiket bírnak kérni mindig, amikor kell nekik valami. Azt üzizem nektek, szarcsimókcsik, nyalcsizzátok ki a pink segglukcsimat.”

I just looked and looked on, trying to figure out the words:
-My sweetness, what the heck was that?!
Les, always the gentleman, steered the car away.
-Nothing, honey. She must be a local witch or something. Better not to intervene with these tribal laws...
-And what is a „szívesség”?
-From what I know in Hungarian, it must be some kind of sexual favour, dear.
MY GOSH, was I truly stunned!!!4444444 Thank God I didn’t ask him what „nyalcsizzátok ki a pink segglukcsimat” means! Our arrival and first evening went rather smoothly: Les scored some grass from a local dealer. At least it was a cheapo affair, though definitely not quality stuff. Thanks to the joints, the rest of the night was one big blur: we were sitting in the van, laughing maniacally ’till the early dawn – all this nonsense woke up Les’ mate, Danny, who was in a catatonic coma since Amsterdam. So here were, having our fun, when, to our astonishment, Danny jumped out of the black bodybag kept him in, and tried to crawl through the window – more laughter ensued! Later he explained that he saw some armed Raptors coming after him. That Dutch grass surely rearranged his mind. The rush hit us big time at 23:15 – all the while we were watching the local TV stations, like RTL Klub, which aired a docu about the Hungarian Beatles, called Illés – we didn’t understood a word in their lyrics, but the feeling of the sixties was just FAR OUT, man, all this vibrating in the air… So this was our first day here at this…errr…Festival, or whatever. If it’s a festival, there should be music, amirite? Thinking about it, maybe we also heard some distant thumping, but probably it was just the grass’ effect on our hearing. Good night, dear Diary! 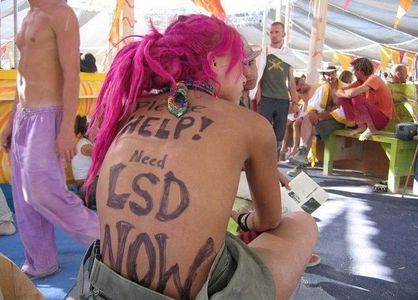 WEDNESDAY, THE 11TH OF AUGUST

Dear Diary!
It’s the second day of the Sziget Festival – or is the minus first –maybe, who knows, who cares. Lúckily, it wazn’t just the grass yesterday – it IS a music festival! Les got some printed programs, which kan be useful later for rolling the joints. No longer we have to see the locals’ grey face, only ticket buyers are allowed here. Our mates From Holland have arrived, and believe it or not, they became some kind of celebrities on their way here: a devout Hungarian music blog followed their páth on the party train from Amsterdam.
What Can i ask now for more? Sometimes life is the pop of the cherry, as the old Sioux proverb says. There are a lot of concerts to go today, first of all we’ll check out the dynamIc duo of Inspector Cluzo at the A38 stage at seven o’clock, then hastiliy move to the main stage for the Hives (Toy Dolls will also play, but they are skinheads, so we don’t like them at all). (We plan to go to bed at 23:10.) Not much else – suRe, There are Local flavours, some unknown Hungarian bands, but we aren’t interested in them, to say at least. DJ Shadow’s upcoming gig will be only visited by the snobs, so we won’t go near to the Party Aréna around eight, we’ll rather have a nice big cup of tea… Or rather not, as the main event will definitely will be the Madnessz gig at ten. That’s about the music, now some words about the place itself. The Sziget is a real island (that’s what it means: sziget = island), placéd neatly into he middle of a jade-coloured river which flows with blood. This bloody river is called „Duna”. We went to sightseeing the town by motorboat. It’s quite a beauty. There are dark cathedrals, the even darker Parlament, which radiates more evil than the Bates House. Coming to think of it, the whole town reeks of evil. Thank God we are here in our boat and island, far from the noise of everyday life, and close to the noise of music… Les noticed that there’s a huge pentagram pattern in the lightning rigs of the main stage. I think it’s just a coincidence. Anyway, off we go to party, dear Diary!!! :))))))))))) 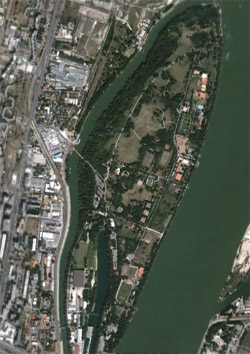 We are in the upper corner now
THURSDAY, THE 12TH OF AUGUST 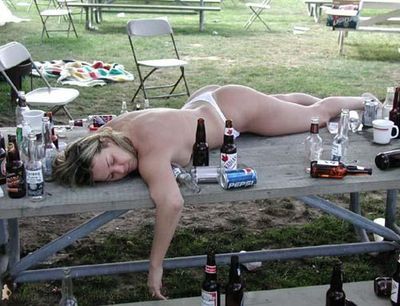 Whew, it was so tiring yesterday. My dear Diary, the Madness gig was frantic, even though there were some skins in the audience (they must have been come from the Toy Dolls gig). Today will be the day of regeneretation, and not of the degeneration, if you catch my meaning : ))) The van is filled with heavy ganja smoke, Les is happily puffing away and so is Danny. I’d like try it, maybe later, as now I’m stoned just by their smoke :/ We’re playing reagge music just to chill out, and try to figure out what to do. Danny and Les are planning their next nighttime foray into Sziget Land, but I feel like I’ve had enough music last night, my head still aches, I think I’ll stick with the TV. Technically, Sziget is the best, it’s really a state which should be a world state: you can buy without money, all you need is the mark of the Beast a nice little Sziget Card. While buying the paper with the TV program, I’ve seen some strange things: the pentagram over the main stage is slightly glowing, even in the daylight, and there are some cool looking, cloaked guys with reversed crosses on their necks. I guess they are GWAR fans (those cartoon metalists also played yesterday). At the van, I’ve cleared my mind from the ganja smoke, and read today’s TV menu. I’ve always had strange feelings about the Farrelly brothers’ works: on one hand, they’ve pumped new life into romantic comedies, ont he other, their films were filled with the lowest kind of jokes (bodiliy fluids, etc). I see that TV2 airs their 2007 release, The Heartbreak Kid at 21:20, well maybe I’ll give it a go – mostly because the beautiful Ben Stiller, who is a favourite actor of mine… <3 Here he plays a bachelor who has to choose between his wife and his real love – whom he met on the honeymoon… I could say that I’m in a similar situation, but I’m not on honeymoon with Les, and have no feelings about Danny. Speaking of which, there’s a real Feast of Love at Duna TV around nine o’clock. I surely won’t watch it, because, despite the title, it’s a complicated romantic movie, with more actors than the whole Lord Of The Rings Trilogy. Even a Hungarian actress, Erika Marozsán is here! This film is all talk and no action, when it comes to love :P On Cinemax 2. at 23:05, a pre-Kick/Ass movie titled Mirageman, where an ill-fated security guard turns himself into a superhero, since hise long-catatonic younger brother thinks he really is one. Okay, so the main man is not a child superhero, but he started to workout as a child, because his parents were murdered in a most ugly way, which left his brother scarred and catatonic…so at least his inspiration has come from the childhood. I think I’ll choose one from these, while Les and Danny are away, partying and banging away. I’ll go out with them on Friday, however. Bye-bye, dear Diary.